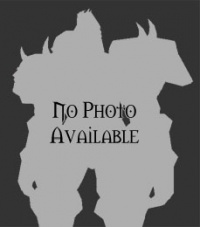 Kilroka, being a Tower Guard, is commonly seen perched in a tower that overlooks the Crossroads. A gray boar is usually somewhere nearby.

(As found in IRP) Kilroka is a notably old orc. Though his head is smooth and hairless, he keeps a rough and bristly beard with coarse white hair. He stands at one inch above eight feet and his body bulges with muscle, however through aging he isn't a mighty as he once was. Apart from the typical disfigurements one would expect, his right eye had it's eyelid sewn shut although there is no scarring around it. These days he wears light cloth armor with an axe at his hip and a bow slung across his back. Loyally wandering around the orc a war-trained boar can usually be spotted bearing as many scars as his master.

Although he has been seen on every battlefield since the opening of the Dark Portal, Kilroka is not an Orc of renown. He has never held any significant rank nor has he accomplished any feats that mark him separate from his brethren. He is just another haggard veteran.

Retrieved from "https://moonguard.fandom.com/wiki/Kilroka?oldid=16356"
Community content is available under CC-BY-SA unless otherwise noted.